The purpose of the experiments conducted at the Ohio University Continental Ichnology Research Laboratory (CIRL) is to document the burrowing behaviors and biogenic structures of extant continental organisms, especially those that live in soils. These data are primarily used to better interpret similar trace fossils occurring in continental sedimentary rocks. The identity of the tracemakers and the behaviors involved in the production of trace fossils are typically inferred from the morphology (or form) of the trace. These interpretations require knowledge of the types of traces produced by organisms in the modern; this is the science of neoichnology. While these interpretations are often taken at face value, experimental and direct observational data to support these interpretations is often limited, especially with soil animals. A growing number of studies, however, are improving our understanding of burrowing organisms in all environments. To learn more about the study of neoichnology, please refer to the Neoichnology and Trace Fossils page.

The species selected include those from a range of environments and ecological niches. Multiple individuals (5-25) of each species are obtained for study, typically from commercial sources. The individuals of each species include both males and females and are mostly mature adults with a range of sizes. The animals are allowed to acclimate to the laboratory conditions for up to one month prior to the start of the experiments. Temperature and humidity are maintained at near optimal levels for each species and a 12-hour light-dark cycle is kept in the laboratory. Food (typically apples and crickets) and water are made available depending on the needs of each animal, but the animals are handled as little as possible to limit conditioning and the altering of natural behaviors. 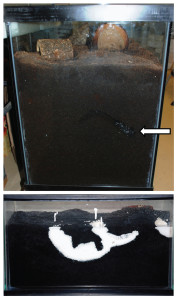 Experiments commence with the placement of an animal into an experimental enclosure. Observational data collected during initial burrowing include the time the enclosure was occupied before burrowing began, the burrowing techniques used, and the time taken to burrow completely into the sediment. When possible, the animals are observed and digitally recorded as they burrow. When the initial burrow is completed, daily observations are conducted to document the behaviors associated with the burrow (In-situ). At the end of each experimental period, the animals are removed from the enclosure and the open burrows are filled with Drystone® plaster. After 24 hours the hardened casts are excavated and described.

The architectural and surficial morphology of the burrow casts are described both qualitatively and quantitatively. Architectural morphology consists of the burrow’s general appearance, dimensions, cross-sectional shape of shafts and tunnels, orientation in the sediment, type and amount of branching, and degree of interconnectedness of different burrow elements. Surficial 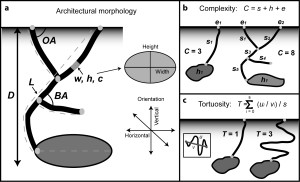 morphology includes structures (scratches, bumps, linings) on or around the burrow walls produced during excavation and occupation of the burrow. Ten quantitative measurements of burrow morphology were recorded for each burrow cast: 1) maximum depth; 2) total length; 3) tunnel or shaft width; 4) tunnel or shaft height; 5) ratio of average cross-sectional width to height; 6) tunnel or shaft circumference; 7) angle of shafts or tunnel with respect to the surface; 8) angle of branching if present; 9) complexity; and 10) tortuosity. Depth was measured from the surface opening to the base of the deepest tunnel or chamber. The total length includes the length of all of the shafts, tunnels, and chambers. The width, height, and circumference of the tunnels, shafts, and chambers were measured every 2-5 cm; these values were used to determine minimum and maximum values and to calculate a mean value for each property. The angle of branching was the acute angle measured between intersecting tunnels or shafts. Burrow complexity and tortuosity are scale-independent values used to differentiate burrows produced by animals of different sizes. Burrow complexity is the sum of the number of segments, surface openings, and chambers. The tortuosity of a burrow system is a measure of the deviation of the tunnels from a straight line calculated by dividing the total length of a tunnel by the straight-line distance between the ends of the tunnel.