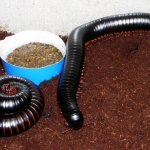 Burrowing Technique
Archispirostreptus gigas burrows by compressing the sediment through head ramming, conducting minimal excavation and transport of sediment to the surface. As a result the burrows constructed by A. gigas are lined with compacted sediment, which is thickest on the upper surfaces. The linings are most apparent when there is clay present in the soil. 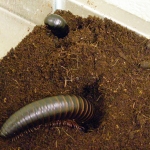 Burrowing Behavior
Archispirostreptus gigas begins to burrow within 24-36 hours after placement in experimental enclosures. Before burrowing, the millipede moves around the perimeter of the enclosure. Once burrowing begins, A. gigas will burrow completely below the surface in 15-30 minutes. There is no consistent placement of burrows within the experimental enclosures; some are begun at the edge of the tank and many in the center. Burrows are produced during detritus feeding and are used as temporary shelters. Specimens of A. gigas generally remain in the soil for only 2–72 hours and spend approximately 90% of their time on the sediment surface. When occupying a burrow for longer than 24 hours, A. gigas backs out of the burrow to deposit fecal pellets on the sediment surface; fecal pellets were never deposited within the burrows. Organic rich sediment is ingested during burrowing, as up to 60% of the composition of fecal pellets may be the burrowing medium. To exit the burrow A. gigas either uses the original burrow opening or produces a new surface opening. New openings tend to be produced when specimens of A. gigas are below the surface for <6 hours. Once constructed, the burrows are kept open to the surface and maintained through regular use.   Trace Morphology
Archispirostreptus gigas produces five distinct burrow architectures: subvertical ramps, helical burrows, U- and W-shaped burrows, and mazeworks; examples of each are shown below. Each photo is linked to an information page about the specific burrow architecture shown. 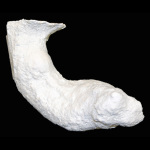 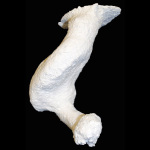 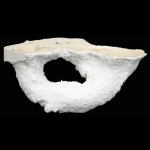 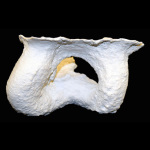 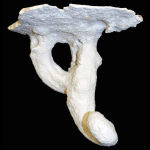 Click here for the complete photographic archive of all burrows produced by A. gigas.