The purpose of the Continental Ichnology Research Laboratory (CIRL) is to investigate the behaviors and biogenic structures (burrows, nests, tracks, trails) produced by modern continental organisms in order to better interpret trace fossils preserved in continental deposits throughout geologic time.

Research in the CIRL focuses on the burrowing behavior and biogenic structures of extant terrestrial animals for application to the study of ichnofossils. Ichnofossils provide an important in situ record of paleoenvironmental and paleoecological conditions that has become an essential aspect of sedimentology, stratigraphy, and paleontology. By studying the behavior of extant continental tracemakers, the morphology of their burrows, nests, tracks, and other traces may be correlated to continental environmental factors such as temperature and precipitation, depositional environments, and such substrate characteristics as soil consistency, moisture level, and organic content. In addition, if trace morphology can be linked to specific taxa or body morphologies, then these traces may be used in lieu of body fossils to determine the geographic and temporal range of different groups of organisms. 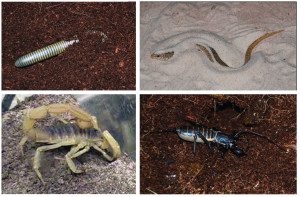 Laboratory based experiments of modern burrowing continental animals in the CIRL allow for the direct observation of the production of biogenic structures under known environmental conditions. Experiments conducted in the CIRL have involved several species of millipedes, centipedes, scorpions, whip scorpions, spiders, salamanders, toads, and skinks. These animals represent common soil organisms that have a long evolutionary history known primarily from body fossils. While the trace fossil record of these animals is comparatively poor, this is likely due to a lack of recognition rather than a lack of fossil material.

The Continental Neoichnology Database contains the results of these experiments including basic descriptions of the animals studied, their behaviors, and the biogenic structures they produced as well as the detailed qualitative and quantitative data collected from each study. Photographs, videos, and downloadable files are available for each of the animals. These data are available here to help improve the interpretation of continental trace fossils and the understanding of the impact of continental burrowing animals on terrestrial sediments.