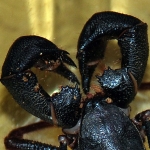 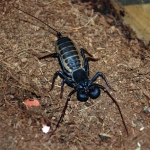 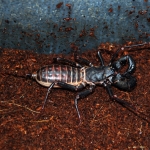 Burrowing Technique
Mastigoproctus giganteus uses its pedipalps to excavate and transport sediment from the burrow. The pedipalps are racked against the sediment surface and burrow walls to collect masses of loosened material. The packages of loose sediment are grasped by the pedipalps and carried out of the burrow. Vinegaroons are able to transport sediment in this way equally well across flat ground or while backing out of a vertical burrow. The sediment is deposited 10 to 20 cm away from the burrow entrance. The vinegaroon is capable of producing a burrow large enough for its entire body in approximately 1 hour, however, the burrow is continuously modified over the time of occupation.

Burrowing Behavior
Mastigoproctus giganteus uses burrows as temporary shelters to permanent dwellings. Typically, one to two burrows are created initially and then subsequently abandoned having never been inhabited or having been occupied for less than 24 hours. The sediment excavated from the burrow can be used to cover a shallow burrow or to infill specific tunnels within more complex burrows. New shafts and tunnels are continuously constructed, adding to the complexity of the burrow system over time. A standard burrow may progress from a vertical shaft or subvertical ramp to a J-shaped burrow, a U-shaped burrow, a Y-shaped burrow, and finally a mazework. Not all burrows progress to the mazework stage before being abandoned, however, and sometimes the vinegaroon will infill parts of the burrow to make it less complex over time. This often results in the isolation of the vinegaroon in a single open chamber with no connection to the surface.

Trace Morphology
Mastigoproctus giganteus produces six distinct burrow architectures: vertical shafts, subvertical ramps, J-, U-, and Y-shaped burrows, and mazeworks; examples of each are shown below. Each photo is linked to an information page about the specific burrow architecture. 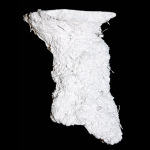 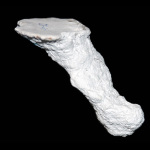 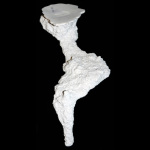 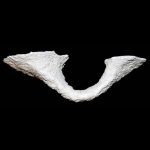 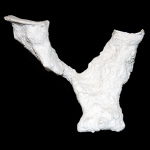 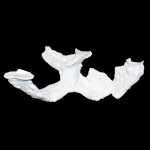 Click here for the complete photographic archive of all burrows produced by M. giganteus.