What are Trace Fossils? What is Ichnology? 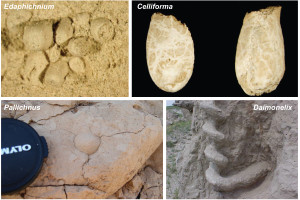 Ichnology is the study of trace fossils. Trace fossils are the preserved tracks, trails, burrows, borings, bite marks, and fecal material left behind in sediment, soil, rocks, and other media by animals as they engaged in variety of behaviors. These behaviors include locomotion, escape, dwelling, resting, grazing, feeding, nesting, pupation, and more. Trace fossils are vital to paleontological and sedimentological studies. Most tracemakers are soft-bodied organisms that are commonly not preserved as body fossils; the only record of their existence is, therefore, in the form of trace fossils. These types of organisms often represent the greatest amount of biomass in any given environment. Trace fossils are quite common in sedimentary rocks, even in those that lack body fossils, providing evidence of life despite the absence of shells, bones, and teeth.

Fundamentally, trace fossils are records of behavior. The morphology of a trace fossil may also be used to interpret details about the environment in which it was produced and even the type of organism that produced the trace. This is because specific organisms engage in a certain subset of behaviors and these behaviors are modified by the environment in which the organism is living. There are several challenges that ichnologists face when interpreting trace fossils. Many different organisms can create the same type of trace while engaged in similar behaviors. In addition, since most organisms engage in more than one kind of behavior throughout their lives, each organism may produce a variety of different traces. For any individual trace fossil there may have been multiple tracemakers responsible for its production, creating a patchwork of interconnected structures. It is equally likely, however, that an individual organism produced a single structure with multiple parts each part different in form due to changes in behavior or the environment. What makes the interpretation of trace fossils possible despite these complications is the field of neoichnology.

Neoichnology is the study of the traces that living animals produce while engaged in a variety of behaviors under known environmental conditions. The purpose of neoichnological studies is to improve the interpretation of the origin of trace fossils by directly linking trace morphology to behaviors, environmental conditions, and tracemakers. By studying the biogenic structures produced by modern tracemakers, therefore, the morphology of their burrows, nests, tracks, and other traces may be correlated to a variety of environmental factors such as temperature and precipitation, depositional environments, and such sediment characteristics as consistency, moisture level, and nutrient content. In addition, if trace morphology can be linked to specific taxa or body morphologies, then these traces may be used in lieu of body fossils to determine the geographic and temporal range of different groups of organisms.